Continuing on yesterday’s theme, a quality receiver is worthless without an effective antenna.Then…

Antennas are a critical component of our equipment.   A natural extension of the Cryptologic Technician, the antenna is the beginning of the process — from detection and collection, to demodulation, to audio — ending in the ears of the operator or scope of the signals analyst.   Each component is a vital part of the cycle.  If one fails, the cycle ceases.

We sometimes take antennas for granted, assuming they are designed for the appropriate mission or operating to the highest standard.  At other times we surround ourselves with their presence…

…and build plaques to honor their memory. 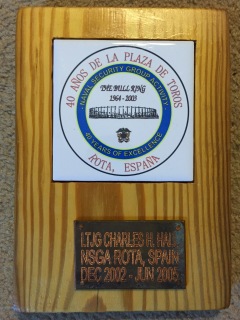 A general ignorance of the engineering and design concepts can lead us to failure.  Antenna type, length and feed, polarization, layout, resonance, ground plane, gain — all are critical items to consider.  Dipole, Monopole, LPA, Loop, Yagi, Whip — all antenna types with very different applications.  Are we using the right antenna for the mission?  Has the antenna been maintained to standards?  Would a different antenna be more effective?

Today, antennas are more dynamic and effective than ever.  Commercial research and development has resulted in incredible advancements in antenna technology.  These efforts have resulted in antennas that are smaller, lighter, and more sensitive than ever.  Similar to the evolution of software-defined receivers, smart and reconfigurable antennas have now been developed.

Imagine installing a reconfigurable or smart antenna on a Naval Surface Combatant.  No matter what the mission, the antenna could be reconfigured to accomplish the task using only software.  Connect it to a software-defined radio, and…well, you get the picture.

How can Navy Cryptology better leverage advances in antenna technology?

Do we have a culture that allows us to rapidly integrate advancements in antenna technology?

What other commercial technologies can help us further evolve?