“The complete cessation of [special] intelligence concerning U-boats in the Atlantic coincided with the devastating attacks on shipping by U-boats off [U.S.] coasts.  In fact, the outlook during the summer of 1942 was rather gloomy.”  — Memorandum from OP-20-G, July 15, 1944

For America, Germany’s changeover of the naval Enigma from three rotors to four was only one of many problems.  Having just entered the war a month and a half earlier, the U.S. had not yet applied any of the Allies’ lessons learned from the previous years of fighting the Axis.  Merchants were not operating in convoys, they were not provided armed escorts, and cities along the eastern seaboard were not “blacked-out” at night — making it extremely easy for German U-boats to sight the ships against a well lit back-drop.  The result was devastating.  More than two hundred ships were sunk during the first three months in 1942.  Though it came at a price, the U.S. would soon implement the countermeasures necessary to better protect its merchant fleet.  Conquering the four-rotor naval Enigma problem would prove somewhat more elusive.

Prior to America’s entry into the war, the U.S. Navy had contributed little in the way of Enigma collection or decryption.  They had relied primarily on the British to provide relevant information.  Now that America was fully engaged in the battle, that reliance would become much more critical.

In early 1942, Bletchley Park pledged to have a solution to the four-rotor Enigma by August or September.  As time passed, the U.S. Navy’s cryptologists of OP-20-G became more and more impatient and began to “press Britain for further information.”[1]  In response to America’s concerns, GC&CS sent Colonel John Tiltman to visit OP-20-G in Washington.  Following his visit, he concluded that the U.S., having a newfound “vital interest in submarine traffic,” was “entitled to results.”[2]  He further advised England that U.S. naval cryptanalysts would begin to duplicate efforts to break the new machine if a “rapid and satisfactory solution” could not be found.[2]  A few months later, Britain conceded that they would not be able to meet the original fall deadline.

On September 4, 1942, after several months of U.S. Navy research — including a visit to Bletchley Park, the Chief of OP-20-G, Admiral Redman, approved funding for the American bombe project.  The contract was awarded to the National Cash Register (NCR) in Dayton, Ohio.  The NCR then established the Naval Computing Machine Laboratory (NCML) to lead the effort and named engineer, Joseph Desch, as its Research Director. 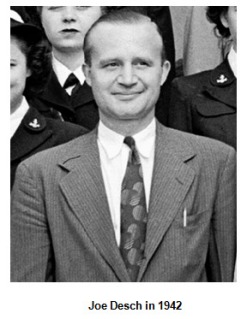 Desch set about the task immediately, employing hundreds of Sailors and women accepted for volunteer emergency service, or Waves, to build the bombes.  For security reasons, they knew little of what they were doing as it related to breaking the German Enigma.  Nevertheless, both Sailors and Waves worked around the clock for months building Desch’s design.

Similar to the British three-rotor machine, Desch’s bombe was designed to operate based on a crib, or unenciphered text assumed to appear in the message.  The assumed text would determine the proper settings for decryption.  Once the assumed text was determined by cryptanalysts, the dials and rotors would be set and the bombe would process the message.  The advantage over the British design was that the rotors on Desch’s bombe spun much faster — upwards of 1,725 RPM.[1]  The speed of the machine would result in faster processing and, hence, quicker delivery of critical information into the hands of decision makers.

The first two prototypes, named Adam and Eve, were completed on May 1, 1943.  Four weeks later, following some basic maintenance and final checks, the first operational tests were conducted.  On May 28, 1943, actual German Enigma messages were run through both Adam and Eve.  The results were consistent after several runs on both machines.  Satisfied that the machines had operated as designed, printouts of the results were sent back to OP-20-G.  A few days later, Commander Engstrom of OP-20-G revealed that the rotor settings produced by Adam allowed naval cryptanalysts to break a German Enigma message indicating the location of three U-boats and a tanker.  All four vessels were attacked and sunk by the Allies. 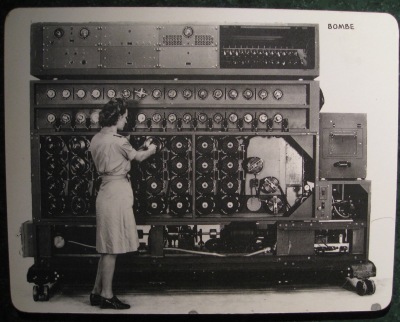 The successful tests of Adam and Eve catapulted the construction of additional bombes for use by the U.S. Navy.  In the coming year, 121 cryptanalytic bombes would be built and forwarded on to their new home at the Naval Communications Annex in Washington D.C. for operational use in the fight against Germany in the Battle of the Atlantic.  Their worth was quickly proven.  Jennifer Wilcox writes:  “By the spring of 1944, ninety-six operational bombes routinely broke the U-boat messages.  The average delay in breaking the daily key settings was only twelve hours.  As a result, the Navy could read the Atlantic U-boat messages sent in the latter half of the day at the same time as the Germans.”[1]  The Allies would not be blinded again.

The Edge of Victory

Though there were many factors that contributed to Allied victory in the Atlantic, special intelligence from German naval Enigma decrypts stands out amongst them all.  For it was intelligence that provided naval commanders and decision makers with penetrating knowledge of the enemy necessary  to not only defend against the U-boat threat, but to also target them and their resupply vessels offensively.  Captain Kenneth Knowles, former Head, Atlantic Section, Combat Intelligence, on the staff of the Commander in Chief, U.S. Fleet, in a presentation at the Naval Academy in 1977 summarizes the significance of breaking the German Enigma to overall victory in the Battle of the Atlantic.

“As events recede into history, few of them retain a significance worthy of recall, but the life-and-death struggle known as the Battle of the Atlantic certainly does.  Throughout it were woven technical achievements of the highest order, giving advantages and break-throughs first to one adversary and then to the other.  But transcending all of these skills was Ultra [special] intelligence, the breaking of the German U-boat cipher.  It gave first to the British and then to the Americans the edge of victory at sea; and from it flowed victory in Europe.”[3]

It was these words by Captain Knowles that inspired this very writing.  As we, at Station HYPO, continue to strive to celebrate the past, present, and future of naval cryptology with our readers, let us not forget that we cannot continue in the present, nor into the future, without remembering and honoring our gloried past.