Information in Warfare: The Battle of the Atlantic

The CNO and VADM Ted Branch have recently discussed the criticality of information in warfare and information as warfare.  Though the concept of information as warfare is relatively new, information in warfare is as old as war itself.  In fact, Sun Tzu, thousands of years ago, exhorted military commanders to “know your enemy and know yourself.”  Knowledge of the enemy is, indeed, power — power that enables success on the battlefield.  Many great examples of the influence of information in warfare can be seen throughout World War II.One of those examples is the Battle of the Atlantic.  Churchill called the battle “the dominating factor all through the war.”  “Never for one moment,” he continued,  “could we forget that everything happening elsewhere, on land, at sea or in the air depended ultimately on its outcome.”  I would further submit that information was the dominating factor all throughout the Battle of the Atlantic. 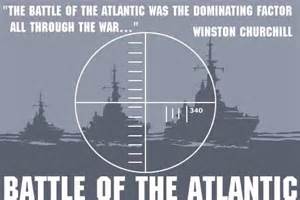 The Allied experience in the Battle of the Atlantic illustrates well the essential role of accurate information and reliable intelligence in warfare.  Though the Allies had already learned the lesson of forming and escorting shipping convoys in World War I, those measures would be ineffective without knowledge of German U-boat locations.  The Third Reich’s new and highly-effective operational use of submarines in concentrated wolf-packs only compounded the problem.  Intelligence regarding the tactical and operational employment of German U-boats was absolutely essential to the Allies’ ability to counter the threat to merchant shipping carrying resources necessary to continue to prosecute the war on the European continent.

At the beginning of the war, Poland, having spent years attempting to break the German Enigma code with some success, shared their advances and tools with Britain and France.  Armed with this information, British cryptanalysts at Bletchley Park worked feverishly to build a bombe capable of breaking the German cipher.  Despite many setbacks, including a deadly 10-month period in 1942 in which the Germans blinded the Allies by changing the Enigma from three rotors to four, the British, and later, along with the Americans, were able to place the right amount and level of technical expertise, cryptanalysis, and technological and monetary resources to break the code.  This significant accomplishment provided sufficient knowledge of German U-boat locations, operational schedules, and tactics necessary to counter the threat.  Stemming from this cryptologic success, the Allies had the information needed to not only route convoys away from U-boat wolf-packs, but to also offensively target submarine re-supply vessels which were significantly extending U-boat on-station times.

It is also important to note that breaking Enigma was not the only intelligence effort which contributed to Allied success in the Battle of the Atlantic.  Airborne surveillance, flown by long range patrol craft, contributed to the Allies’ ability to monitor a gap in collection over the central Atlantic Ocean where German U-boats had previously been able to avoid detection.  These aircraft were further used to fly over the convoys keeping German U-boats submerged and thus, less effective.  Additionally, more advanced radar, radio direction finding equipment, and communications equipment outfitted on Allied ships and aircraft also contributed significantly in triangulating German U-boat locations in the Western Atlantic — particularly during times of Enigma “black-outs.”

The Allies’ knowledge of German U-boat locations, tactics, and techniques directly contributed to their ability to counter the threat and land essential resources in Europe.  Without that critical information, the Battle of the Atlantic, if not lost, would have jeopardized the Allies’ ability to continue to wage war on the European continent as well as their ability to launch an effective invasion at Normandy – both of which were strategically necessary for bringing an end to the Third Reich.

In warfare, military commanders determine what information they know, what they don’t know, what intelligence they have to fill the gaps, and then decide on a course of action accordingly.  Armed with information, leadership at all levels is better poised to make informed decisions necessary to wage an effective campaign.

One thought on “Information in Warfare: The Battle of the Atlantic”