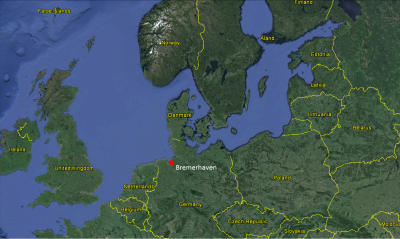 On June 29, 1951, the Naval Security Group began its first operations in Germany with the arrival of five Communications Technicians (CT) at the Herzog, Germany base.  In the Fall of 1951, the team moved to Bremerhaven and was attached to the 23rd Detachment of the 2nd Radio Squadron Mobile.
Prior to the establishment of the NSG Dept, Net Control Station Todendorf, Germany at Naval Advanced Base Bremerhaven maintained a Signals Intelligence (SIGINT) Van that deployed to the U.S. Army Firing Range at Todendorf and other locations along the East-West German Border.
On February 9, 1953, the Naval Security Group Detachment, Naval Forces Eastern Atlantic and Mediterranean were established at Bremerhaven, under an officer in charge. The detachment was composed of seven officers and 107 enlisted men, and was administratively and logistically subordinate to the Naval Advanced Base. The station was designated Navy Communications Unit Thirty Two Dog (NCU-32D)
On June 11, 1956, NSGA Bremerhaven was commissioned.  Sixteen years later on December 31, 1972, NSGA Bremerhaven was disestablished and closed with most of the personnel and all the mission and functions transferred to NSG Det Augsburg, Germany.  The command was formally disestablished on June 30, 1972, but operations continued beyond that date.  During the period from May to December 1972, most sailors assigned to NSGA Bremerhaven were reassigned to NSGA Bremerhaven’s detachment at Augsburg.
As a result of NSGA Bremerhaven’s disestablishment, the detachment at Augsburg was redesignated as NSGA Augsburg.  Of the 700 Navy and Marine Corps billets allocated to NSGA Bremerhaven, approximately half were transferred to NSGA Augsburg with the remainder transferred to NSGA Edzell, Scotland or NSGA Rota, Spain.  Company “F” Marine Support Battalion was relocated to the Naval Station at Rota, Spain.  At the time of official disestablishment NSGA Bremerhaven was the largest overseas NSGA.