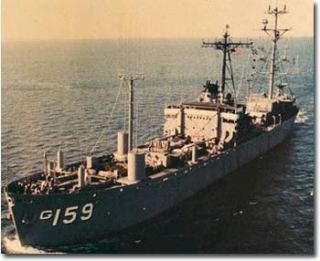 History has recorded the Cuban Missile Crisis as having occurred October 16, 1962 – October 28, 1962:  a total of thirteen days.  October 16th being the day after photographic intelligence confirmed the existence of Soviet medium-range ballistic missiles in Cuba and October 28th being the day Khrushchev directed the dismantling, and return, of offensive weapons in Cuba.   In reality, the story began long before October 1962.

Two years earlier in September 1960, communications intelligence, collected by the National Security Agency along with its three Service Cryptologic Agencies – to include the Naval Security Group, provided the first indications that Soviet arms were being transported to Cuba via multiple cargo ships.   Similar reports revealed high-level visits from a Soviet arms export chief to Havana as well as the purchase of Soviet helicopters by Cuba.

In 1961, persistent surveillance would further confirm suspicions of a significant Soviet military buildup in Cuba.  In February, signals intelligence indicated Cuban pilots were training in Czechoslovakia; in May, communications intelligence revealed Cuban air force personnel were learning Russian; in June, radars were being installed for possible use with artillery units…all the while Soviet cargo ships continued to dock in Cuban ports and unload their cargo under the cover of night.

Continued collection efforts by the Naval Security Group, et. al., in 1962 would paint an even clearer picture of Soviet capability and intent in Cuba.  Of particular note were successes in the area of electronic intelligence.  In May of 1962, electronic intelligence provided the first evidence of the use of SCAN ODD, a Soviet airborne intercept radar associated with MiG-17 and MiG-19 aircraft, in Cuba.  Later in the year, electronic intelligence would provide another key development.  According to the Center for Cryptologic History’s NSA and the Cuban Missile Crisis:  “Human sources and photography could spot SA-2s, but signals intelligence would provide the first indicator of their operational status… NSA reported the first operation of a SPOON REST radar, associated with the SA-2.  The SA-2 was operational and could shoot down a U-2.  Subsequent overflights would be at risk.”  The Department of Defense was not going to sit idly by while Khrushchev continued to increase his footprint in the western hemisphere.

On 16 July 1962, the Secretary of Defense, Robert McNamara, directed an increase in the signals intelligence program to combat the Cuban problem.  Three days later, in a Memorandum for the Secretary of the Navy, the Naval Security Group (OP-94G) was specifically directed to “realign its resources to provide greater coverage of Cuba in response to highest priority intelligence requirements.”

The memorandum recognized that such realignment would have some degree of impact on naval intelligence collection and acknowledged that loss would occur in other collection efforts.  To try to mitigate this deficit, the Naval Security Group would coordinate with DIRNSA in utilizing personnel from her sister agencies — the Air Force Security Agency and the Army Security Agency – to man her stations.  The memorandum also discussed several other measures by which the Naval Security Group would meet the SECDEF’s requirements:

(1) Provide an additional 20 officers and men to two undisclosed locations.

What most label as a crisis is more accurately described as a persistent effort against a formidable adversary over the course of two years.  Such was the experience of the cryptologists of the Naval Security Group.  Their round-the-clock efforts helped to ensure that the crisis was not unnecessarily prolonged beyond what most remember as thirteen days.